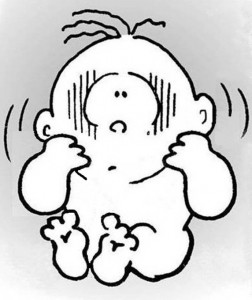 Last weekend my wife and I spent time with old friends from our time living in Oxford UK, Dave and Di Nutt. Dave is now a psychiatrist and neuropsychopharmacologist working at Imperial College London UK and is a world authority on brain function specialising in the research of drugs that affect the brain and conditions such as addiction, anxiety and sleep.

I discussed with Dave how I considered from personal patient observations over the years that a pregnant woman’s mental state could have a profound impact on the mental state and behaviour of her child. A placid, easy going woman is more likely to have a more placid baby and well-adjusted child whereas a woman who is very anxious in pregnancy is more likely to have a child who is more anxious. Indeed often the anxious pregnant woman will report that her own mother is a very anxious person. So this anxiety tendency is being passed ‘from generation to generation’.

Dave said to me: “that’s been proven!” He told me an excellent study done by Professor Vivette Glover in his unit involving more than 7,000 mums-to-be. The study was done to get an overview of how stress and anxiety during pregnancy can affect the baby’s wellbeing.

Professor Glover found a woman with considerable anxiety during her pregnancy can double her risk of having a hyperactive child. Women who were anxious in the last trimester of pregnancy had children with more behavioural problems. Those who had boys were twice as likely to have a child who showed problems with hyperactivity and inattention problems at age four. The association between anxiety and hyperactivity in girls was less significant.

Professor Glover has done considerable further reach on this topic. More information about her and her publications can be found at the Imperial College London website.

But it is important to recognise that all women get anxious from time to time in pregnancy. Professor Glover is considering the most extreme cases of women with chronic anxiety “Most children of even quite anxious women are not affected, but if she is in the top 15% most anxious of the population, there is twice the risk of her child having symptoms of ADHD, conduct disorder, or anxiety and depression. There is also a risk of the child having various problems with learning and thinking.”

Professor Glover also states “some children are predisposed to be anxious, and some children are more vulnerable to something like ADHD. I think with all these things we are talking about there is an interaction between the genetics – the actual innate predisposition of the child – and the environment. And I think that an emotionally balanced, happy mother is likely to help to make an emotionally balanced happy child. But it is not the whole story so that though we want to do all we can to do this, we mustn’t blame mothers for problems that children have either.”

Quite a few years ago I had a patient who had extreme nausea and vomiting throughout all her pregnancy. She was very anxious and distressed by this throughout the pregnancy and would say to me on multiple occasions how she wished she was not pregnant. She had a successful outcome of a healthy boy.

Sometime later when I saw her again she told me of the considerable behavioural problems of her son. She had been to child psychologists and psychiatrists but no one could really help. I reminded her of how she was in that pregnancy how she had rejected her baby in-utero and told me on multiple occasions that she did want the pregnancy to continue as she was so unwell. She agreed that she was like this in the pregnancy. I suggested to her that she go home, get down on her knees in front of her child so she was the same height as her son, explain all this to her little boy, apologise and tell him how sorry she was for what she said and felt and tell him how much she loves him and is blessed to have him. She did this. She told me her son in response burst into tears gave her a big hug and said: “Mummy, Mummy I was so frightening inside you!” His behaviour immediately improved.

What can you do?