Another reason why not to go public for pregnancy care 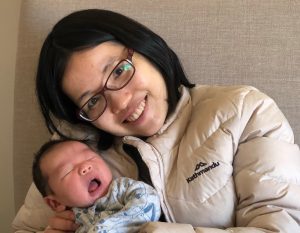 Wendy had her first baby at a major public hospital as a public patient. She needed an emergency Caesarean section. She said the operation was done by a young female doctor who she had never met. She never saw this doctor again after the operation. Wendy said she had considerable postoperative pain. Pain continued as problem after she went home. The pain that continued happened whenever she tightened her abdominal wall muscles. She said whenever she did this she had severe pain.

Wendy saw me for management of her second pregnancy. We planned an elective Caesarean section as the mode of delivery. That was done at 39 weeks gestation under a spinal anaesthetic.

The operation was without complication but was a considerable challenge. 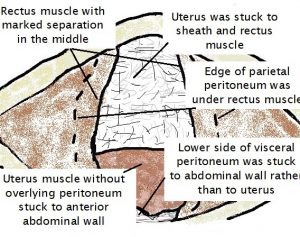 Below skin is subcutaneous fat, which I incised transversely. I then incised the rectus sheath layer transversely. The recti muscles were then seen. They were widely apart, with a large midline muscle defect. I then lifted what I thought was the abdominal wall inner skin, called parietal peritoneum. I soon realised this was not the case. What I was lifting was the uterus skin (called the visceral peritoneum) which was firmly attached to underlying uterine muscle. The uterus was adherent to the anterior abdominal wall! It had been adherent to the sheath in the middle (which I freed) and the underside of the recti muscle to the sides. I found where the uterus wasn’t adherent to abdominal wall, which was lateral to the midline and almost at the level of the umbilicus. I carefully freed the uterus from the anterior abdominal wall – the rectus muscle laterally and sheath superiorly. There was no visceral peritoneum covering the lower uterine segment. The uterus was very adherent in this region to the lower abdominal wall. I then careful identified the uterine lower segment by incision and deflecting adherent abdominal wall downwards. I did a transverse incision in the lower segment of the uterus and delivered a little baby boy weighing 3166gms. 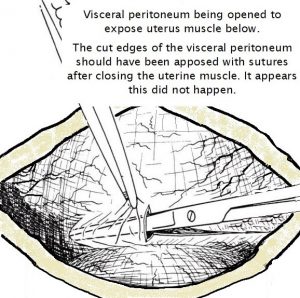 Next was the challenge of closure. I closed the uterus muscle in two layers, avoiding the decidual (endometrium), as is my routine.

The diagram adjacent shows the transverse incision that is made in the visceral peritoneum layer with entry to get access to the uterine muscle.  With closure the cut edges of this visceral peritoneal layer should have been sutured together and so uterine muscle would not be exposed. That did not happen. As a consequence the uterus muscle stuck to abdominal wall with healing after the first Caesarean section. See diagram below. 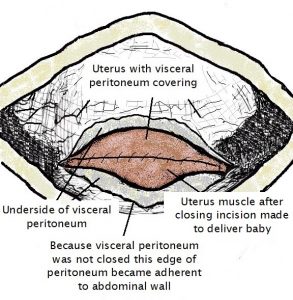 I then found the parietal peritoneum layer edges and stitched them together.  I then apposed with sutures the recti muscle in the midline, so there was no longer a midline muscle gap. I next closed sheath, fat and skin. I injected steroid into skin to minimise the likelihood of keloid formation.

I explained to Wendy after the operation that I suspect the doctor who had done the previous Caesarean section had adopted what I call the ‘minimalist’ approach to closure. By that I mean she closed the least number of layers possible. While this is quicker, it is not in the patient’s interests and can result in what has happened. She would have closed the uterus muscle, then sheath, fat and skin. I am certain she did not close visceral peritoneum, parietal peritoneum and recti muscles. Her technique meant the raw edge of the uterus muscle incision, the uterus above this and visceral peritoneum below could adhere with healing to the inner side of the abdominal wall to which these layers were exposed. As the parietal peritoneum had not been closed and recti muscles had not been apposed that adherence was to the sheath layer in the midline and the rectus muscle lateral to this.

Her postoperative course this time was good. She had no more discomfort than normal and had minimal analgesic requirement on discharge. Most importantly that pain she had when she tightened her abdominal wall muscles had gone.

Wendy advised me the financial cost of being a private patient was so worth it. Not only have I been able to safely deliver her baby, but also restore her internal anatomy to normal and rid her of the pain she had due to her previous Caesarean section.

I emailed Wendy two weeks after her delivery date to make sure she was happy with the article. She said she was and forwarded the photo for inclusion. She included in her email reply the comments: “Like I mentioned, never ever going back to the public hospital again. If I am having a third baby, you will definitely be the first doctor I contacted. So far I totally have no pain, recover much quicker compare to last time. The whole experience with you and the hospital is totally worth the money. I can’t thank you enough for this and I will pass your detail to all people I know.”

It was reported in a Sydney newspaper recently that now 74% of pregnancies are managed in the public system.  It is reported people are opting out of private health insurance because of financial reasons. But the ‘cost’ of being public patient may end up being far more than the financial cost of being a private patient for pregnancy care. I suspect many of these people who switch to public think it will be the same as being private. But this is certainly not the case. There is an expression ‘if you don’t pay much you don’t get much’ and that is so try for public health care. The public system has always been needed for those who are genuinely financially disadvantaged. In Australia the public health care system is certainly a better quality than what is available in many other countries. But it is of lesser quality than private health care with the right specialist doctors. Lesser quality translates as more risk of complications and avoidable bad outcomes, which in pregnancy care can have devastating ongoing consequences. 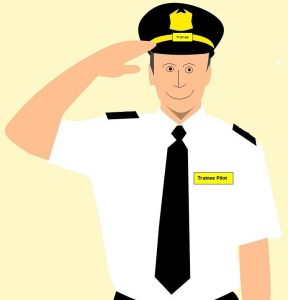 The public sector has always been the ‘training ground’ for junior staff. It is where trainee specialists learn their skills. I suspect many people don’t realise this what they opt out of health funds. I suspect most public patients don’t realise their management as a public patient will be by midwifery nursing staff and junior doctors. It is unlikely that a fully qualified specialist will be directly involved in their care. These junior doctors lack clinical experience and knowledge. Their clinical skills reflect this. I also hear about lack of supervision and training of junior doctors.

A comparison is you can get free air travel for your holiday by using a government airline. You are on board the plane and discover the pilot is actually a trainee pilot with little experience.  As well, this trainee pilot is the only pilot on board.

Not only did this junior doctor’s surgical technique leave a lot to be desired but there was lack of relationship, lack of communication and lack of personalised care experienced by  Wendy. The doctor never visited her postoperatively. That was something I always did when I was a junior doctor (trainee obstetrician).

Now with more patients going public but without extra government resources to meet these increased demands the already overstretched public health care system will be less able to cope and the quality of health care in the public sector will predictably get worse. In the media there have been an increasing number of reports of patient’s concerned about their care received in the public sector. I predict this will continue to increase.

Pregnancy and childbirth are often the most dangerous times of a woman and her unborn baby’s lives. There is huge and increasing difference in quality of care between private and public. To opt for the public care to save money can be very short-sighted and result in outcomes which a woman and her baby regret long-term.

Remember that if you do go private there is no guarantee there will not be a complication in your pregnancy. But if there is an adverse development as a private patient it will be managed by a fully trained and experienced obstetrician and so it is far more likely this complication will be handed more appropriately. As well because of clinical experience many adverse developments can be foreseen, and steps taken to prevent or minimise their impact on your and your baby’s well-being. Also bear in mind not all private hospitals are the same and the experience, clinical expertise, attitude and caring of obstetricians are not all the same.

There is more information about why not to go public for pregnancy care in my website articles titled: