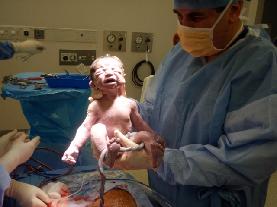 Will I need a Caesarean section?

A Caesarean section is an abdominal operation to deliver your baby. It is either an emergency or elective operation.

An emergency Caesarean section is done when there is an urgent complication in pregnancy or labour which significantly compromises your or your baby’s wellbeing (or both). This implies that continuing the pregnancy or labour for a significant time will be very dangerous. How quickly the Caesarean section needs to be done will vary from extremely urgent (viz immediately) to within the next few hours.

An elective Caesarean section is a pregnancy planned event. The reason could be previous pregnancy or labour problems, maternal health issues, complications in this pregnancy and sometimes personal patient request. Some women prefer to have a Caesarean section rather than a vaginal birth.

What happens with a Caesarean section? 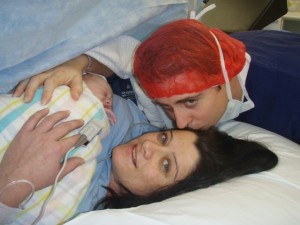 The operation procedure and anaesthetics are discussed in the topic ‘Caesarean Section’ in the Pregnancy Care section.

While there are significant risks associated with the operation, because of improved surgical and anaesthetic techniques and new drugs the incidence of serious complications is much less than historically was the case. Personally, I have never had a serious Caesarean section complication (surgical or anaesthetic) even though I have done many hundreds of Caesarean section. I will discuss risks in detail with you in consultation.

Isn’t recovery worst after a Caesarean section than after a vaginal delivery?

In hospital stay is often no longer than after a vaginal delivery with some women wanting to go home on the third postoperative day.

I advise my patients who have has a Caesarean section to take it quietly the first week at home and then resume normal activities gradually as the body allows. If it hurts or makes you too tired then slow down. I advise a post-Caesarean section patient should not drive a car until she is pain-free. That means if you can brake suddenly without it hurting you then you can drive. Some have reported they are driving within two weeks after they are home! Insurance companies say “it is up to the doctor to decide when you can drive”. Most women are doing all normal activities before the six-week postnatal visit.

Will I need a Caesarean section next time also? 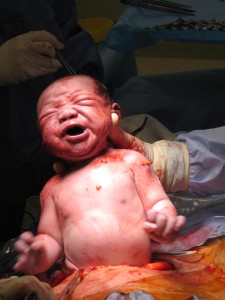 It depends on many factors including the reason for the first Caesarean section, your preference and whether you can accept the implied risk of an attempt at a vaginal birth after a Caesarean section (also called VBAC or Trial of Scar).

If you choose a VBAC then you and your baby will need close monitoring in labour. But be reassured, I have never had a ruptured uterus even though I have managed many labours after Caesarean sections.

What’s the biggest risk of VBAC? 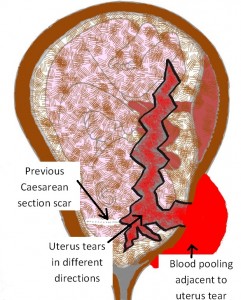 Having a Caesarean section does have implications for the next delivery. The biggest concern of an attempt at a vaginal birth after a Caesarean section (VBAC) is uterine rupture in labour. This is because scar tissue forms in the uterine wall with healing where it was cut. Scar tissue is not as strong as non-scarred tissue and so there is an increased risk of uterine rupture.

The generally stated incidence of a uterus rupturing in labour after a Caesarean section is about 1 in 200 cases, although the reported incidence in studies varies from 1 in 70 to 1 in over 300. The implied risk will vary according to circumstances and be greater for some women than others.

Uterine rupture is very uncommon before labour. In labour, it is due to the shearing forces of the contractions pulling on the lower segment region of the uterus where the Caesarean section scar is located.

Unfortunately whether or not the uterus will rupture cannot be predicted. Uterine rupture occurs without warning and is a retrospective diagnosis.

Extra precautionary measures are taken in a labour after a Caesarean section to try to diagnose uterine rupture early. This included continuous foetal heart rate monitoring (CTG) as sudden fetal distress may be the first sign. Some obstetricians will not allow an epidural in labour as they believe an epidural can mask signs of uterine rupture. Sudden sharp pain over the scar is a sign of tearing and this will be missed if there is an epidural. Personally, I am happy for you to have an epidural in labour if that is your preference. Also with uterine rupture, there can be vaginal bleeding, a sudden cessation of contractions with the uterus tearing and the mother can become faint or even go unconscious because of low blood pressure with internal bleeding.

What damage uterine rupture causes depends on how severe the uterine tear is and where it is located. As well as a tear in the uterine wall the tear can extend and can result in trauma to major internal organs (bladder and bowel) and to major blood vessels (such as the uterine artery) which result in life-threatening internal haemorrhage.

A ruptured uterus will always need urgent surgery to deliver your baby and assess and deal with internal damage in you. This surgery is usually done under a general anaesthetic because of the gravity of the situation. Necessary surgery to correct damage can be very major and very high risk and may even involve the need for an emergency hysterectomy (surgical removal of your uterus).

Your baby can end up outside your uterus in your peritoneal cavity, having been extruded through the hole in the uterine wall. If the blood flow to the baby is affected by the uterine rupture, the rupture can result in reduced oxygenation or even cessation of oxygenation to the baby. Your baby can suffer because of severe lack of oxygen organ damage including permanent brain damage and even in death.

What is placenta accreta?

Placenta accreta is associated with risk of marked haemorrhage which can be life-threatening. As well there may need to be major surgery including sometimes the need for an emergency hysterectomy. Whether you have a placenta accreta can be checked by ultrasound scan with some degree of accuracy.

I have personally done many thousands of Caesarean sections and to my knowledge, I have never had a patient with any significant degree of placenta accreta after a Caesarean section I have done personally. I believe my good track record reflects my careful surgical technique with closure of the uterine wall. I avoid suturing the endometrium layer (also called ‘the decidua’ in pregnancy) and I close the uterine muscle in 2 layers.

As well I have a very low incidence of intraperitoneal adhesions, which is far less than I have seen when many of colleagues have done the previous Caesarean section. I believe this is because of my careful surgical technique with closure of the abdominal wall layers. I close ALL layers – the uterus in 2 layers (avoiding the endometrium), the peritoneum layer over the uterus, the peritoneum layer on the back of the abdominal wall, the rectus muscle layer (which results in a flatter tummy), the sheath layer, the subcutaneous fat layer, and the skin layer.